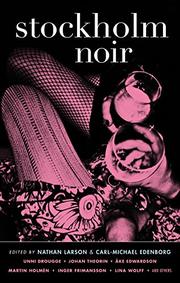 Larson and Edenborg manage to unearth a dark side to a city that “is verdant, clean, and surrounded by crystalline water.”

Since Sweden’s crime rate is so low, many of these 13 new stories revolve around social issues. Affordable housing is surprisingly high on the list. In Johan Theorin’s “Still in Kallhäll,” Inger Frimansson’s “Black Ice,” and Carl Johan De Geer’s “The Wahlberg Disease,” the lust for desirable homes becomes a driving force to crime. Sweden’s version of the war on drugs powers Anna-Karin Selberg’s “Horse.” And co-editor Larson’s “10/09/03” offers a Swedish take on good old-fashioned xenophobia. Martin Holmén’s “The Smugglers” features more conventional law breaking, and there’s plenty of room for tales of love gone wrong, like Åke Edwardson’s “Stairway from Heaven,” Malte Persson’s “The Splendors and Miseries of a Swedish Crime Writer,” and Unni Drougge’s “Death Star.” But “gone wrong” doesn’t come close to describing the romantic calamities of Lina Wolff’s “Northbound” and Torbjörn Elensky’s “Kim.” Co-editor Edenborg shows a police officer sliding off the rails in “Nineteen Pieces.” And Inger Edelfeldt’s “From the Remains” is a testament to what Larson and Edenborg call Swedes’ love of “scaring themselves.”

Stockholm may not be Marseille, but Larson and Edenborg’s contributors show that even a verdant place with socialized medicine can have its seamy side.