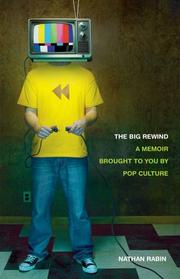 A Memoir Brought to You by Pop Culture

With pop culture as his guide, the head writer for The Onion A.V. Club reflects on his turbulent, angst-ridden youth.

In a tone-setting opening paragraph, Rabin fantasizes about his ideal funeral, which he imagines as a “wildly excessive tribute to me, me, me,” before concluding that “not even death’s sweet release can keep me from being self-indulgent and wasting everyone’s time.” His coming-of-age memoir affirms half this statement: It is self-absorbed, overly self-aware and occasionally self-pitying; it is not, however, a waste of time. Thanks to his acerbic voice and dark humor, the author transforms his miserable childhood and prolonged battles with depression into an improbably entertaining, even uplifting tale. When Rabin was 12, his father left his comfortable governmental job and relocated the family to Chicago, where they quickly tumbled into poverty. With his father unable to care for him, the author spent most of his high-school years in a group home for underprivileged adolescents, where he used pop culture as a refuge from his despair, familial neglect and sexual frustration. While the author’s personal struggles continued at the University of Wisconsin, he also happened to be in the right place at exactly the right time—the upstart satirical newspaper The Onion was still based in the college town. Once he joined the publication’s entertainment division, Rabin was able to put his undying love of pop culture to productive use. Oddly, it is when he begins to write for the A.V. Club that the memoir loses its momentum. His run-ins with celebrities are not particularly insightful, and the lengthy section that he devotes to his ill-fated television show, Movie Club, veers between wide-eyed naivety and condescension toward his fellow participants. Still, Rabin’s raw humor and infectious enthusiasm are more than enough to overcome the narrative dry spots.