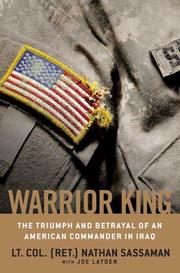 The Triumph and Betrayal of an American Commander in Iraq

by Nathan Sassaman with Joe Layden

A battalion commander who challenged army leadership and was punished for it scathingly indicts America’s miscalculations in Iraq.

West Point graduate and career soldier Sassaman was deployed in 2003 as battalion commander of the Fourth Infantry Division’s 1-8 Infantry in Iraq. From day one, he ran afoul of his superior officer, Colonel Fred Rudesheim, whose “filtered, innocuous, and risk-averse orders,” the author believed, contributed to the preventable killing of his men. Although a stickler for order, Sassaman calls himself a type-A personality who encouraged in his command the judicious “crossing of boundaries” in cases of life and death. Boastful of the success demonstrated by his battalion, he admits he had become “something of a warrior king in Iraq,” paving the way to career suicide by continually challenging the orders of his superior. Then, on the night of January 3, 2004, two of his men detained two Iraqi males in northern Samarra shortly after curfew and forced them to jump in the Tigris River. “A high school prank,” declares the author, who was in command but not present at the time; he repeats the soldiers’ assurances that they saw both men walking away from the river and points out that no body was found. Nonetheless, an investigation was conducted and Sassaman held accountable for the alleged drowning of one of the Iraqis. He got a “letter of reprimand under Article 15 proceeding,” which meant that he could be promoted to colonel but no higher. He might have been able to live with that, but an April 5 article in the Washington Post, with extensive quotes from Rudesheim, brought the incident to public attention, and Sassaman retired the following summer. “I thought we could win the war,” he writes. “But there is no war right now. It’s law enforcement, and we’re losing ten, fifteen soldiers a week to law enforcement.”

A valuable insider’s look at the many-layered ramifications of the American-Iraqi tragedy of errors.