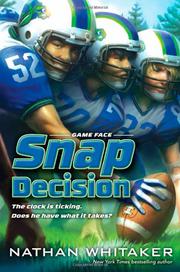 From the Game Face series, volume 1

Two teenage boys struggle to shine on their varsity football team even while their own friendship suffers after one of them is injured.

Archie F. Carr School is unusual in that it serves all students grades one through 12 in Lincoln, Fla. This means that the varsity football team is potentially open to even eighth-graders like Chase. He’s thrilled when he’s asked to start practicing with the varsity team and attend their games as a backup quarterback, but this realization of his dream doesn’t come without a price. His best friend, Tripp, suffers a head injury on the field, and when Chase tells the truth about the severity of the concussion, Tripp ends the friendship. Will their bond be strong enough to weather the rough patches? Whitaker’s (Uncommon Marriage, 2014, with Tony and Lauren Dungy, etc.) foray into middle-grade fiction never manages to break free of its flat tone. The characters, both children and adults, display a lack of energy, even on the football field. Their dialogue is stiff and monotonous. Emotional issues that deserve center stage—such as Chase’s fraught relationship with his dad and his sister’s recurring nightmare—are mostly ignored in favor of play-by-play accounts of football losses and wins.

A sports tale infused with moments of Christian prayer and frequent lessons in morality that never establishes itself as a realistic account of young teens, either on the field or off.