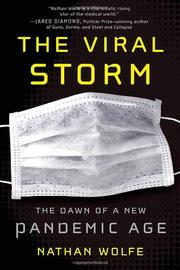 The Dawn of a New Pandemic Age

From a well-traveled virologist, an eloquent argument for why we need better ways to predict and thus prevent major disease outbreaks.

Wolfe, the CEO of Global Viral Forecasting, begins by describing the ubiquity of microbes, the most abundant biomass on earth. Viruses in particular can inhabit any cell type, making them the most diverse and flexible of organisms, frequently mutating and able to exchange genes with kin. Our ape ancestors picked up viruses from insect bites and from the animals they hunted, giving them a rich microbial repertoire. That would diminish, not only because the grasslands were less fertile ground, but because the pioneer groups were small. This evolutionary “bottleneck” resulted in the loss of some pathogens (the bugs either killed their hosts or the survivors became immune, leaving no one to infect). The advent of cooking would further reduce the repertoire. But then came animal domestication and farming, upping the repertoire as people in settled communities became targets for new microbe sources. Fast-forward to today’s hugely interconnected urbanized world and, you have the ingredients for a pandemic: a worldwide outbreak of disease spread from human to human. That happened with HIV, the result of two monkey viruses that combined in a chimpanzee, which was later eaten by hunters. It hasn’t happened yet with bird flu (no human to human spread), but it could. To forestall epidemic disasters, improved surveillance systems are under way, including Wolfe’s company, which is using the latest technologies to identify new disease bugs and track cases using rapid communication links. Most importantly, the company is establishing “sentinel” outposts at remote jungle sites where people still consume bushmeat or in other ways may be “the canaries in the coal mine.”

Wolfe makes clear that most bugs are harmless; some are even helpful. But his wide experience confronting killer diseases in Africa and Asia makes for important, graphic reading and underscores his passion for prevention.