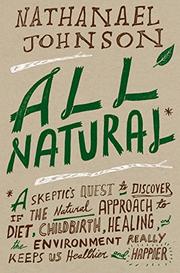 In his debut, journalist and This American Life contributor Johnson examines aspects of medicine, food and the environment to encourage informed decisions among readers caught between the nature-vs.-technology argument.

The author personalizes his topics by filtering them through accounts of his upbringing during the 1980s as the son of then-countercultural parents who embraced natural living and through his journey into parenthood. Though he admits to a romanticism that favors a “natural aura,” he remains open to contrary evidence and allows that both camps can be valid at different times. Johnson examines controversies with choice anecdotes, research and interviews, including: the success of midwifery at reducing maternal deaths in comparison to births aided by common obstetrical interventions; the belief that raw milk carries harmful pathogens while pasteurized milk is safer; the back-to-the-land school of thought when it comes to nutrition versus the results of industrialized chemistry; the purported dangers of sugar consumption; risks and benefits related to vaccination; homeopathic and allopathic approaches to medicine; and large-scale and sustainable farming. The most intriguing sections feature studies on human milk and on anthropological findings in remote areas, while sections that recall the author's childhood perspective border on the indulgent. Johnson surmises that nature and technology could coexist—a balanced and perhaps obvious view unlikely to satisfy the fringes—but he presents a refreshing optimism that neither extolls the organic to the point of supporting pseudoscience nor negates the value of scientific advancements.

Not intended as an exposé, but as an overview, the book strikes at the heart of hot-button issues with an Everyman appeal.