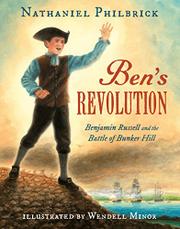 Benjamin Russell and the Battle of Bunker Hill

A boy experiences the Boston Tea Party, the response to the Intolerable Acts, and the battle at Breed’s Hill in Charlestown.

Philbrick has taken his Bunker Hill (2013), pulled from its 400 pages the pivotal moments, added a 12-year-old white boy—Benjamin Russell—as the pivot, and crafted a tale of what might have happened to him during those days of unrest in Boston from 1773 to 1775 (Russell was a real person). Philbrick explains, in plainspoken but gradually accelerating language, the tea tax, the Boston Tea Party, the Intolerable Acts, and the quartering of troops in Boston as well as the institution of a military government. Into this ferment, he introduces Benjamin Russell, where he went to school, his part-time apprenticeship at Isaiah Thomas’ newspaper, sledding down Beacon Hill, and the British officer who cleaned the cinders from the snow so the boys could sled farther and farther. It is these humanizing touches that make war its own intolerable act. Readers see Benjamin, courtesy of Minor’s misty gouache-and-watercolor tableaux, as he becomes stranded outside Boston Neck and becomes a clerk for the patriots. Significant characters are introduced, as is the geography of pre-landfilled Boston, to gain a good sense of why certain actions took place where they did. The final encounter at Breed’s Hill demonstrates how a battle can be won by retreating.