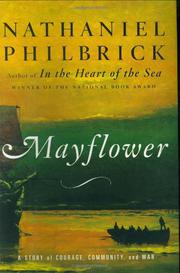 A Story of Courage, Community, and War

Known for his special talent with a sea story, National Book Award–winner Philbrick (Sea of Glory, 2003, etc.) here uses the Pilgrims’ perilous Atlantic crossing as mere prelude to an even more harrowing tale of survival in an alien land.

From the voyage of the Mayflower to the conclusion 56 years later of King Philip’s War, this is a sensitive treatment of the transplanted Europeans’ encountering of and clashes with the native tribes of the New World, all of which prefigured in many important respects the development of later American colonies. The strict discipline of the Pilgrims’ intense spiritual commitment, responsible in many ways for the colony’s initial success, inevitably gave rise to later political and religious schisms. Notwithstanding the forging of the Mayflower Compact, their political and economic lifeline stretched, vulnerably, across the ocean. More than anything, survival depended on alliances with Native Americans, and Philbrick excels at exploding commonly accepted notions about this complicated relationship. The Pilgrims were by no means the first Europeans in New England. Explorers and fishermen had already brought contagious diseases to the continent and decimated local populations. Nor had these visitors arrived at some Eden innocent of conflict. The tribes had engaged in diplomacy and warfare for centuries; they used the Pilgrims to shift balances of power among themselves. In Philbrick’s graceful retelling of a story many think they already know, the virtues and vices of each culture are given their due, and the complexities of the conflict between and among them explored. Prominent roles are assigned to such well-known names as Squanto, Samoset, Massasoit and his son Philip, who (with the help of obtuse Governor Josiah Winslow) touched off the regional war that bears his name. The Indians contended with the likes of William Bradford, Miles Standish and Benjamin Church, who appears to have lived the role of Natty Bumpo well before James Fenimore Cooper imagined such a character.