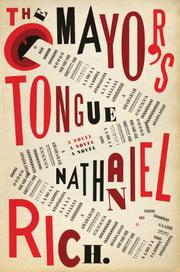 Constance Eakins, “a colossus of the last American century,” was, before his death at 82, ferociously at work on The Mayor’s Tongue, the 26th tome in an august career highlighted by his major trilogy, The Slayed, The Slaying and The Slaughter, just released by Modern Library, with a foreword by the esteemed Director of the Eakins Center at Yale. This kind of bogus pomposity plainly delights the author. The book of the title—and the mayor—and the tongue—are largely mythic, part of the strange quest of white-haired, book-mad Chisholm, Eakins’s fiercest fan. A recent émigré from the Dominican Republic, Alvaro, a former furniture mover, is commissioned to catalogue all of Chisholm’s Eakinsiana, for him an oddly delicate pursuit. Alvaro’s tale, including his attempt to have his own literary opus translated, despite his translator’s total ignorance of Alvaro’s Dominican dialect, alternates chapters with the tale of two congenial and truly odd oldsters, Mr. Schmitz and Rutherford. Schmitz’s beloved wife Agnes is nearing death and, desperate for Rutherford’s solace, Schmitz hunts him everywhere. But, after the pair’s long conversations—highlights include the fact that “Ferrara” is the most difficult Italian city name to pronounce—Rutherford vanishes. The novel’s narratives play off each other, offering literary allusions to H.L. Mencken, Simone de Beauvoir and Yasunari Kawabata.

A debut novel that will appeal most to punch-drunk bibliophiles.