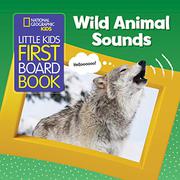 From the Little Kids First Board Book series

One double-page spread is devoted to each of 10 animals (some may feel that calling chipmunks, frogs, and ducks “wild” is stretching it a bit). The animals hail from all over the map—from an elephant and a zebra to a black bear and a wolf. The sound each creature makes begins the text, followed by a sentence speculating what the animal might be communicating. Six of the spreads highlight an additional animal fact in a bright yellow circle. White thought bubbles on seven spreads that attempt to inject humor are less successful. For example, in response to the wolf’s howl, the wolf pups think, “Should we answer?” Similarly, on a different spread, the primary text reads, “Roar! Time for dinner, the mother tiger calls.” The tiger cub wonders in response, “What’s the catch of the day?” The typical board-book audience of babies and toddlers will not get the jokes, and preschoolers are ready for more-substantial books. The needless anthropomorphization detracts from what could be simple, useful nonfiction. The final spread reprises six of the animals in a guessing game to “Match the animals with the sounds they make.” Ocean, published simultaneously, is similarly formatted (and flawed), but all the creatures featured share the ocean habitat.