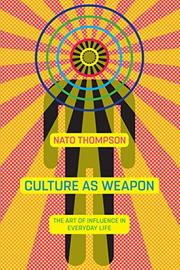 The Art of Influence in Everyday Life

How persuasive cultural mechanisms are encoded in broader social structures, from high art to war-planning.

Thompson (Seeing Power: Art and Activism in the Twenty-first Century, 2015, etc.) confidently casts a wide net in his discussion, seeing hidden hands of artifice and marketing that have long manipulated the citizenry. “I want to explain the ways in which those in power have to use culture to maintain and expand their influence,” he writes, “and the role that we all play in that process.” The author supports this ominous claim with a historical timeline and various categories of real-world occurrences, first focusing on the early “persuaders” of advertising and public relations and then looking at diverse examples, from lifestyle corporations like Apple and IKEA to the Pentagon’s counterinsurgency theorists. Thompson first argues that the 1980s “culture wars” over art and funding provide a lens for understanding cultural manipulation within politics: “A number of forces were learning to utilize the power of culture to push forward their own agendas.” He then looks further back to 1914, arguing that the Ludlow massacre of striking miners led John D. Rockefeller to develop innovations in public opinion–shaping that became widespread during World War I. During the 1920s, wartime propaganda morphed into the modern advertising and polling industries, embodied by George Gallup, who founded the American Institute of Public Opinion in 1935. As Thompson notes regarding Gallup’s prescience, “if he could predict elections, what else could he do?” Yet simultaneously, artistic collectives and radical groups were recognizing the power of the same techniques, and the author explores topics from Dada and Andy Warhol to Saul Alinsky and the Black Lives Matter movement. Thompson characterizes our own time as deeply fearful, tying the racist politics of Lee Atwater’s “Southern Strategy” to current controversies around mass imprisonment and police overreach. The author moves effortlessly between subtopics and tautly addresses particular oppressive social mechanisms, yet his focus on the pervasiveness of persuasion feels unsurprising.

A precisely written critique of cultural manipulation in our daily lives.