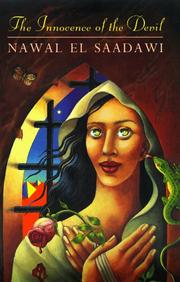 THE INNOCENCE OF THE DEVIL

Set in a madhouse, this modern passion play portrays Egypt's harsh patriarchal society and its devastating repression of women. Saadawi (Woman at Point Zero, not reviewed, etc.), a well- known Egyptian feminist and dissident who currently teaches at Duke, makes the injustices that take place in her novel's asylum reflect on all of Egypt. Ganat, a proud and independent young woman unwilling to be subservient, ends up in the asylum. Narguiss, her childhood friend, is the head nurse. The story unfolds through dreamlike flashbacks that begrudgingly reveal a narrative while painting a bleak picture of women's position in Egypt. In one surrealistic scene, Ganat is tried by a judge who shares the characteristics of the oppressive men in her life: the director of the asylum, the King, her grandfather. She is accused of being born with her eyes wide open, not wearing a veil, and allying herself with Satan. Women outside the asylum don't fare well either. Narguiss is haunted by her inability to bleed from her hymen on her wedding night, even though she is a virgin. Her father, dishonored, killed himself that night. Ganat, like many if not most of the women in Egypt, has had a clitoridectomy. Throughout, women are chastised, belittled, and beaten. Passages from the Koran and the Bible are cited, suggesting that Islam and Christianity are to blame. The asylum setting allows Saadawi to include God and the Devil as two deluded inmates. At one point, the two scuffle in a cynical take on the battle between good and evil. By the end of the book, the Devil is revealed to be the scapegoat that allows God to do his worst to women. God whispers to the Devil, who is now gone, ``You made the world so rich for me....'' A poetic and beautiful novel about a great ugliness—the systematic and widespread oppression of half of Egypt.