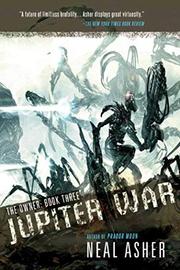 Final installment in the medium-future trilogy (Zero Point, 2013, etc.) featuring an armed struggle between a brutal Earth regime and a single post-human intelligence.

Ruthless dictator Serene Galahad has killed half of Earth’s population with a virus triggered by implants in their brains, an act for which she blames Alan Saul. Saul, a fusion of human and artificial intelligence, has vastly expanded his brain into the electronic systems of Argus Station, currently orbiting near Jupiter. He develops new fast, smart robots capable of linking in teams, accomplishing in hours what would take ordinary humans months or years. He has a warp drive for interstellar travel. The crew of Argus Station is now superfluous to his needs. He wonders if he’s still human. Should he just dump his crew and flee? Yet his sister will die a slow death on Mars unless he rescues her. Serene, he realizes, has her own hardware-equipped, computer-linked “comlifers” that in a few years will grow powerful enough to challenge him. She will eventually develop her own warp drive. And she has three warships nearing completion. Meanwhile, a heavily damaged vessel, having failed to destroy Saul, heads toward Earth, some crew members intent on killing Serene, others hoping to bargain with her over the Gene Bank, the key to rebuilding Earth’s devastated ecology. Violence, of course, is what Asher does best—by presenting a stunning, brutal spectacle and taking his readers right into the middle of it. He expertly ratchets up the narrative tension and excitement with high-tech mayhem and technological razzle-dazzle. And it’s a genuine pleasure to watch him construct a formidably advanced intelligence and show us its capabilities.

A must for fans of the trilogy; newcomers will want to start with Book 1.