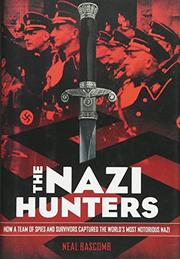 Adolf Eichmann was among the Gestapo war criminals who managed to escape from Europe and establish new lives in Argentina. The search for him involved an international group of Nazi hunters who left no stone unturned to determine where and how he had fled, find him and bring him to justice.

The trail of the man, an exacting scheduler who oversaw the transportation of Jews to the concentration camps, went cold until one small clue led to another. He was finally traced to Argentina, captured and secretly removed to Israel for a public trial. Meticulously detailed plans with timing down to the minute involving several Israeli secret services, intelligence networks, other civilian and governmental agencies, and dedicated individuals brought him to justice. Drawing on a wealth of sources that include original interviews, Bascomb swiftly establishes background, introduces readers to the key players and takes them through the search. At any moment in the hunt something might have gone wrong, with those involved being captured as spies and allowing Eichmann to escape. Tension rises from the pages, thanks to Bascomb’s command of pacing, judicious use of quoted material, inclusion of archival photographs and strong descriptions.

It’s nonfiction as thriller in its recounting of the actions of a midlevel, monstrous clerk and the work of a few dedicated people in delivering him to justice.