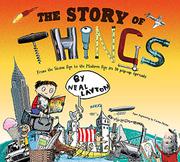 THE STORY OF THINGS

Early humans about 3 million years ago had “no things,” and Layton wants to show us how they—we—got them.

The artistic style is squiggly and agitated, with occasional collage photos and other overlays. Pictures run in double-page spreads punctuated by tiny identifiers (“No Plates to eat off”), foldouts and larger pop-ups. The left-hand, lower corner of each spread gives a time frame (“12,000-4,000 YEARS AGO”) as readers and humanity move from pointy stones as tools to fire to civilizations, freely dispensing gags along the way. Did the ancient Greeks really invent the hula hoop? “Wheels are wheely useful!” Noting the invention of champagne by Dom Perignon is a nice touch for adult readers. “Ye Book of ye Middle Ages” centers on Europe of course, with a nod toward China for the invention of gunpowder. Perhaps the most amusing paper-engineering effect is the steam engine, which makes a chugga-chugga sound while smoke billows and three bearded guys bounce around behind. At the end, bigger and faster engines give way to smaller and faster microchips. There are several images of this title in various places within the text—very meta indeed—but no references and a lot of generalities. One might say that there is little gender or ethnic mix, but the figures are so abstract or cartoony that it may not matter. There isn’t a lot of matter here, period.

Curiously uninvolving, but it may get children to thinking about stuff and maybe inventing some gizmos of their own.