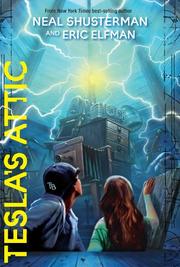 From the Accelerati Trilogy series, volume 1

In Book 1 of the Accelerati Trilogy, Nick Slate cleans out his attic, holds a garage sale and changes “the very course of human existence.”

The junk in the attic of Nick’s new house seems to be a “boneyard of uselessness,” but the old toasters, electric mixers, cameras and tape recorders turn out to be lost inventions of a mad scientist, and finding them makes Nick and his friends “part of some invisible clockwork…churning its gears toward some dark, mysterious end.” The box camera foretells the future, the See ’n Say toy channels the universe, little brother Danny’s baseball glove draws stars from the sky, and a depleted wet-cell battery brings the dead to life. A posse of sinister scientists is after these objects for their own questionable ends, and if Nick’s garage sale has unleashed forces that might end the world, they also might reveal a way to head off the extinction of the human race. Lively, intelligent prose elevates this story of teenagers versus mad scientists, the third-person point of view offering a stage to various players in their play of galactic consequence. A wild tale in the spirit of Back to the Future, with a hint of Malamud’s The Natural tossed in. (Science fiction. 8-14)