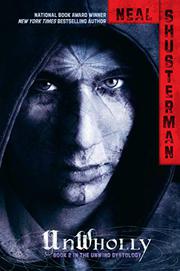 From the Unwind Dystology series, volume 2

After surviving the attack on the Happy Jack Harvest Camp, the heroes from Unwind (2007) lead the revolt against the Unwind Accord.

Connor, aka the Akron AWOL, now heads up the resistance at the Graveyard, an abandoned airfield where 700-plus unwind escapees live in hiding. His wheelchair-bound girlfriend, Risa, who also survived the attack, serves as the Graveyard’s nurse. Lev, a former tithe, now leads missions to rescue other tithes from unwinding and sends them to a camp where they can cope. Enter Cam, a schizophrenic, teenage Frankenstein built from the body parts of 99 different unwound teens. Shusterman mercifully supplies a Q&A at the front of this sequel to help readers fill in details from Book 1 in the trilogy. He also does an expert job of plunging them headfirst into his disturbing, dystopic and dangerous future world where teenagers are either handed over by their parents or kidnapped for “unwinding,” or organ harvesting. While the plot moves quickly, the work definitely reads like a sequel—a good one. Shusterman is obviously setting the scene for a big climax in Book 3, and his only fault is excess. There are so many new characters and plot twists and segues that readers may feel overwhelmed or confused, but that won’t stop them from turning the pages.