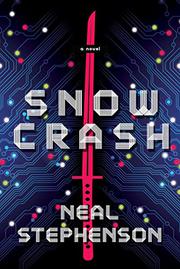 The familiar-sounding backdrop: The US government has been sold off; businesses are divided up into autonomous franchises ("franchulates") visited by kids from the heavily protected independent "Burbclaves"; a computer-generated "metaverse" is populated by hackers and roving commercials. Hiro Protagonist, freelance computer hacker, world's greatest swordsman, and stringer for the privatized CIA, delivers pizzas for the Mafia—until his mentor Da5id is blasted by Snow Crash, a curious new drug capable of crashing both computers and hackers. Hiro joins forces with freelance skateboard courier Y.T. to investigate. It emerges that Snow Crash is both a drug and a virus: it destroyed ancient Sumeria by randomizing their language to create Babel; its modern victims speak in tongues, lose their critical faculties, and are easily brainwashed. Eventually the usual conspiracy to take over the world emerges; it's led by media mogul L. Bob Rife, the Rev. Wayne's Pearly Gates religious franchulate, and vengeful nuclear terrorist Raven. The cultural-linguistic material has intrinsic interest, but its connections with cyberpunk and computer-reality seem more than a little forced.

The flashy, snappy delivery fails to compensate for the uninhabited blandness of the characters. And despite the many clever embellishments, none of the above is as original as Stephenson seems to think. An entertaining entry that would have benefitted from a more rigorous attention to the basics.