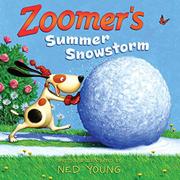 From the Zoomer series

A cold snack on a hot day turns into a gleefully over-the-top winter fantasia. One steamy summer afternoon, Zoomer the pup asks to make a snow cone, and, yes, he’ll clean up when he’s done. And he does…but it’s what happens in between that will capture readers’ imaginations. Zoomer takes advantage of an overflowing snow-cone machine to change summer to winter. Armed with only a shovel, he begins by carving a snow duck but quickly escalates to a menagerie that includes dinosaurs, a whale and a dog Sphinx. Then it’s a cocoa break in the fantastic castle of Zoomarctica. Meanwhile, his stick-in-the-mud older twin brothers just want to practice baseball. Their incredulous looks and complaints turn to delight, however, when Zoomer crafts an amusement park out of the snow. A rumbling tummy ends the fun on a high note when his request for chili raises his parents’ eyebrows…until they look outside. Relying on his exuberant illustrations to make Zoomer’s world come alive, Young improves on his somewhat-uncertain debut (Zoomer, 2010). The palette really emphasizes the contrast between the cold, blue snow and the vibrant colors of summer. Summer (and maybe winter, too) will never again be the same with Zoomer around. (Picture book. 3-8)