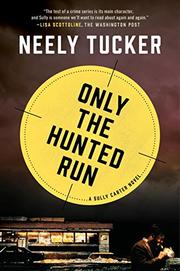 ONLY THE HUNTED RUN

A mass slaughter in the Capitol building sets off this third tense and twitchy installment in the adventures of investigative reporter Sully Carter.

Any Washington, D.C. resident with common sense knows that the nation’s capital is the last place you want to be at the peak of summer, with its swampy air mass and the kind of heat that’s “a hammer [hitting] you in the face.” Nevertheless, Sully is carrying out a routine newspaper assignment beneath the Capitol dome when sounds of gunfire and screaming shatter the doldrums. Sully’s war-correspondent instincts kick in as he weaves around the dead and dying toward the shooting’s source. What he eventually finds is even more horrific: the bound-and-gagged corpse of an Oklahoma congressman with ice picks protruding from both eye sockets. He also hears as the shooter calls 911 and gives his name as Terry Waters before making a clean getaway from police. Things become more bizarre between Waters’ escape and eventual arrest as he seems to adopt Sully, via phone, as his intermediary to authorities. (The gunman finds out that he and Sully have something in common: they both, at very young ages, lost their mothers to violence.) After Waters is indicted, he is committed to D.C.’s notorious St. Elizabeths mental hospital. Sully’s editors dispatch him to Oklahoma for more background on the killer, maybe even a motive. Sully finds all of that and more, far more, than he or anybody else expects, including the reader. What seems at the outset to be an exercise in formulaic “psycho killer” pyrotechnics becomes in Tucker’s hands an ingenious, expectation-trumping mystery that doesn’t scrimp on suspense or shock tactics. Those who have, after this novel’s two predecessors (Murder, D.C., 2015, etc.), become enamored with the embittered but urbane journalist may find less of his complicated personal life here. But they will find plenty more reasons to admire and even like Sully Carter.

Tucker raises the stakes and ramps up the darkness in this series and makes you wonder, and even worry a little about, what’s coming next.