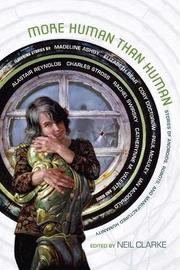 Clarke, the publisher of Clarkesworld magazine, compiles 27 tales of artificial humans and what we see of ourselves in them.

Well-known SF authors grace this collection of androids and AI. Elizabeth Bear's “Dolly” kicks things off with a murder and a question: can an object—a sexbot—defend itself against rape? Asked another way, can it be guilty of a crime? The many conceivable roles for which we might create imitation humans are explored well: from Dolly's fantasy French maid to a perfect boyfriend (Naomi Kritzer's touching “Artifice”) or boyfriends (Sandra McDonald's “Seven Sexy Cowboy Robots,” a hilarious romp); soldiers to fight our wars (Karin Lowachee's poignant “A Good Home”); replacements for those we've lost (Rachel Swirsky's complex “Grande Jeté,” Genevieve Valentine's carefully painful “Small Medicine,” and Martin L. Shoemaker's “Today I Am Paul,” which is quietly sad); public relations (John Barnes' optimistic “The Birds and the Bees and the Gasoline Trees,” Robert Reed's philosophical steampunk “American Cheetah”); and, in several stories, our caregivers, tasked to aid the ones we don't have time for (Fadzlishah Johanabas' compelling “Act of Faith,” Ken Liu's sly “The Caretaker,” Sue Lange's “We, Robots,” which deftly swerves between wry and tragic; Brenda Cooper's intriguing “The Robot's Girl”). Our needs create these beings, but what are their needs? How do they relate to us, and themselves? How do creator and created make peace with each other? Religious allegories are inevitable, and three stories offer a Jewish perspective on these updated golems (Robert B. Finegold's “And the Ends of the Earth for Thy Possession,” Lavie Tidhar's “The Old Dispensation,” and “Grande Jeté”), while other faiths and cultures receive less, but well-executed, attention. Cory Doctorow, Catherynne M. Valente, Jeff Vandermeer, and many other gifted authors also feature; Clarke has collected consistently excellent stories.

A top-notch selection of imaginative and thought-provoking stories about AI, reinventing old tropes and making us revisit the eternal question of what it is to be human.