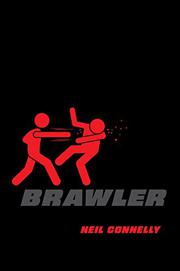 Facing arrest, Mac, who is white, accepts a shady offer to join a secret fighting organization called the Brawlers, a lucrative mixed martial arts–style organization that broadcasts ultraviolent, pay-per-view fighting matches on the internet. Leaving his mother behind, he is given a couch to crash on with his trainer, Khajee, a Thai-American high school girl, and her uncle. Channeling his anger at his abusive father (who is currently in jail), Mac is a natural at the brutal fights but quickly gets in over his head as he is forced to accept side jobs strong-arming and terrorizing the fight club owner’s business partners. Meanwhile, Khajee and her uncle are his only lifelines to the world outside of violence, and as their friendship grows Mac is able to face his own past and his relationship with his father. Detailed descriptions of brutal fights and unrepentant violence may be too much for some, but Connelly (Into the Hurricane, 2017, etc.) also conveys the skill, training, and finesse required to win. While Mac’s internal transformation and the ultimately happy ending may require some suspension of disbelief, it is satisfying when the bad guys get their due.