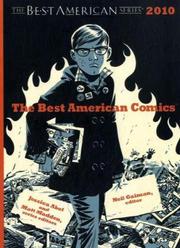 Another star-studded anthology grapples with the challenge of whether comics can survive respectability.

Perhaps inevitably, with each annual edition, the balance shifts more from fresh (even raw) discoveries to luminaries already enshrined in the cultural canon. As series editors Jessica Abel and Matt Madden write in their foreword, “Everyone seems to be pushing to outdo themselves and to live up to comics’ new status as a Medium That Matters.” Thus, this year’s guest editor Gaiman (renowned for his Sandman series) couldn’t think of omitting at least a taste of Robert Crumb’s illustrated Genesis (which Gaiman calls “the most fascinating comic of 2009”). Or a couple of excerpts from David Mazzucchelli’s rapturously reviewed graphic novel debut, Asterios Polyp (2009). Or narratives from literary interlopers Jonathan Lethem and Jonathan Ames. Or the obligatory offerings from Chris Ware, whose entry “Fiction versus Nonfiction” serves as a sort of afterword (and opens with a quotation from John Cheever). Yet the range of possibility under the comic umbrella continues to astonish, with “The Bank” by Derf underscoring the connection between graphic narrative and punk rock, selections from Peter Kuper and Peter Bagge employing the comic strip as a political broadside, Josh Neufeld using the form for journalism (in the wake of Katrina) and Michael Cho for history (of the development of the atomic bomb). There are love stories as well as robots and superheroes, dream journals and family memoirs as well as fantasies. If there’s a problem with the pieces, it is, as Gaiman addresses, “Any extract from a longer work, no matter how well-chosen, is simply that: an extract from a longer work, and the real art is the longer work, with a beginning and a middle and an end, often in that order.” Yet readers who don’t follow the field as closely as the series editors do will discover new favorites and will probably be inspired to buy a few books.

Every year seems to raise the bar.