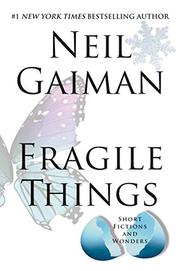 Neo-Goth-Pulp-Noir has pretty much been trademarked by Gaiman (Anansi Boys, 2005, etc.), and these 31 jagged slices of life and the afterlife dependably deliver the damaged goods: zombies, dream-haunted kiddies, femmes fatale and fiends.

Reprising his role from American Gods (2001) as ex-con, taciturn hunk, superhero and reincarnation of the Norse god Baldur, Shadow shakes things up in “The Monarch of the Glen,” battling a primeval beastie and romancing a woodland nymph in the unlikely setting of a tycoon’s get-together on the Scottish heath. “Good Boys Deserve Favours” highlights a lonely lad’s moony passion for his double bass. “Strange Little Girls,” penned to accompany a Tori Amos CD, catalogues the Eternal Feminine from showgirls to Holocaust victims to la belle dame sans merci. “October in the Chair” whimsically features the months as characters. “A Study in Emerald” offers smart, nifty homage to Conan Doyle. In “Harlequin Valentine,” Missy the waitress chows down lovingly on the heart of the motley-clad acrobat of the commedia dell’arte, but even that grisly feast is rendered with swooning lyricism. Gaiman again proves himself a perverse romantic, heir not only to Poe and Baudelaire but to the breathless Pre-Raphaelites. (The poetry he includes here, for example, is generally less creepy than drippy.) He wears his pop cred in boldface, and street-smart hipness saturates these eerie epiphanies. But the collection also boasts lush prose, a lack of irony and a winning faith in the enchantment of stories.

Expect the unexpected. Then savor the luscious chills.