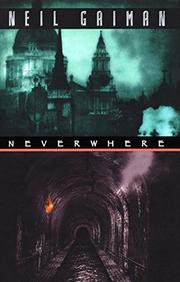 Some of the best pure storytelling around these days is being produced in the critically suspect genre of fantasy, and this exuberantly inventive first full-length novel, by the co-creator of the graphic series The Sandman (1996), is a state-of-the-art example. The protagonist, determinedly unheroic Richard Mayhew, is a young man up from the provinces and living in London, where he has found both job success and a lissome fiancee, Jessica. Soon, however, Richard meets a mysterious old woman who prophesies he'll embark on an adventure that "starts with doors." Sure enough, his fate becomes entwined with that of a beautiful waiflike girl who calls herself Door, and who is in flight from a pair of ageless hired assassins and in pursuit of the reason behind the murder of her family. Suddenly wrenched away from his quotidian life (people can no longer see or hear him), Richard follows Door underground to an alternative "London Below," where "people who have fallen through the cracks" live in a rigidly stratified mock-feudal society that parallels that of London Above. A parade of instructors and guides brings Richard and Door ever closer to understanding why her father was marked for death by the rulers of London Below, and prepares Richard to do battle with the (wonderfully loathsome) Great Beast of London. The ending is both a terrific surprise and a perfectly logical culmination of Richard's journey into the darkest recesses of his civilization and himself. Altogether, Gaiman's story is consistently witty, suspenseful, and hair-raisingly imaginative in its contemporary transpositions of familiar folk and mythic materials (one can read Neverwhere as a postmodernist punk Faerie Queene). Readers who've enjoyed the fantasy novels of Tim Powers and William Browning Spencer won't want to miss this one. And, yes, Virginia, there really are alligators in those sewers—and Gaiman makes you believe it.