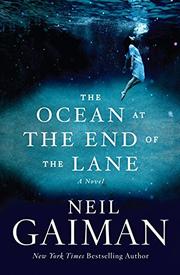 THE OCEAN AT THE END OF THE LANE

From one of the great masters of modern speculative fiction: Gaiman’s first novel for adults since Anansi Boys (2005).

An unnamed protagonist and narrator returns to his Sussex roots to attend a funeral. Although his boyhood dwelling no longer stands, at the end of the road lies the Hempstock farm, to which he’s drawn without knowing why. Memories begin to flow. The Hempstocks were an odd family, with 11-year-old Lettie’s claim that their duck pond was an ocean, her mother’s miraculous cooking and her grandmother’s reminiscences of the Big Bang; all three seemed much older than their apparent ages. Forty years ago, the family lodger, a South African opal miner, gambled his fortune away, then committed suicide in the Hempstock farmyard. Something dark, deadly and far distant heard his dying lament and swooped closer. As the past becomes the present, Lettie takes the boy’s hand and confidently sets off through unearthly landscapes to deal with the menace; but he’s only 7 years old, and he makes a mistake. Instead of banishing the predator, he brings it back into the familiar world, where it reappears as his family’s new housekeeper, the demonic Ursula Monkton. Terrified, he tries to flee back to the Hempstocks, but Ursula easily keeps him confined as she cruelly manipulates and torments his parents and sister. Despite his determination and well-developed sense of right and wrong, he’s also a scared little boy drawn into adventures beyond his understanding, forced into terrible mistakes through innocence. Yet, guided by a female wisdom beyond his ability to comprehend, he may one day find redemption.

Poignant and heartbreaking, eloquent and frightening, impeccably rendered, it’s a fable that reminds us how our lives are shaped by childhood experiences, what we gain from them and the price we pay.