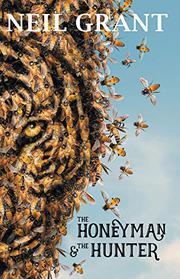 THE HONEYMAN & THE HUNTER

When Rudra Solace’s maternal grandmother from India visits his family in Patonga, New South Wales, he starts to question his identity and the familiarity he feels with a woman he had never met.

Will Didima help Rudra find his roots when life as he knows it is thrown into upheaval? Rudra is on summer break and has been spending his days surfing with his best friend, Maggs Briley—that is, when he’s not being forced to help his father, Cord, with the family fishing business. Cord, who is White, has a tight, invisible leash wound around his family, and both Rudra’s and his mother Nayna’s every action bears the shadow of Cord’s strong hold. Things change when Rudra discovers an unusual object while fishing, and soon he and his mother are off on an adventure to India. Grant captures the layers that come with multigenerational relationships. Lovely interactions between Rudra and his Didima—as well as the stories he hears about his own mother and who she was before she married Cord—give Rudra a strong character arc, from discovering there is more to life than fishing in a small town to being bullied, having his identity as a biracial person called into question, and owning both his Indian and Australian identities. This thoughtful book is reminiscent of Amitav Ghosh’s The Hungry Tide (2004).

A richly realized coming-of-age story about discovering one’s roots and the nuances of family relationships.