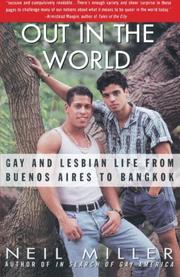 OUT IN THE WORLD: Gay and Lesbian Life from Buenos Aires to Bangkok

Here, Miller extends his In Search of Gay America (1989) to foreign societies that are in transition, even crisis, exploring the ways in which gay men and women reflect the political, social, religious, and economic conditions of their cultures--in Egypt, China, Japan, Thailand, Czechoslovakia, East Germany, Argentina, Uruguay, Denmark, and Australia. Culturally informed, curious, tactful, patient, and serf-effacing, Miller identifies and interviews cultural heroes (e.g., Simon, the ""gay Mandela"" of South Africa), caricatures (a ""sex tourist"" in Thailand), and ""invisible"" gays (Ali in Egypt, where ""every man was bisexual"" but none homosexual). While looking for communities, attitudes, degrees of activism, and concerns about AIDS, Miller reveals the universal relationship between sexual identity and society: While homosexuals are persecuted in South America, they are acknowledged with female names among the aborigines of Australia, and are assimilated in Denmark by being allowed to marry, and in Egypt--where commonplace same-sex relations are not considered ""homosexual""--by being considered members of the ""polymorphous perverse."" Even within the same culture, however, differences in how gays are treated can influence attitudes and behavior. In Australia, Brisbane retains antisodomy laws while, in Sydney, gays celebrate Mardi Gras, and, in Melbourne, they publish a weekly newspaper. Sometimes the desire to act out a homosexual style is overcome by more powerful cultural circumstances: the lack of privacy in Argentina; the importance of marriage and progeny in Japan. And where there is a homosexual style, Miller finds, it is usually derived from America, influenced heavily by the movies and focused on bars. A fascinating tour of the way minorities of any sort--the marginal, the alien, the politically impotent--reflect, adapt to, and influence their cultures.