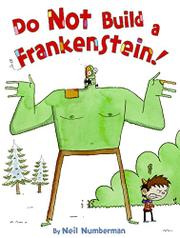 DO NOT BUILD A FRANKENSTEIN!

by Neil Numberman and illustrated by Brian M. Weaver

Standing on a soapbox, the new kid in the neighborhood warns, “Do NOT build a Frankenstein!” The monster stares at him while he’s reading, scares him at night and pushes him so hard on the swing he goes over the crossbar. “All you can do is move away….” Numberman, in his picture-book debut, depicts round-headed, rubber-limbed kids and a towering green monster on impossibly skinny legs. When, entirely predictably, the monster hears his name during the diatribe—“Did someone call?”—the children, orator included, join him in a game of monster tag. If the end doesn’t live up to its setup, there’s no denying the appeal of a giant green playmate with rivets in his neck. (Picture book. 5-8)