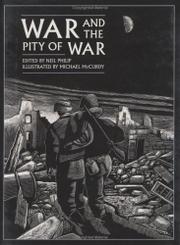 WAR AND THE PITY OF WAR

This startling and honest presentation of the horrors of war from Philip and McCurdy (American Fairy Tales, 1996, etc.) uses poems to thoughtfully balance the often romanticized vision of battle as an expression of bravery and honor. Terror, agony, mass slaughter, absurdity, pointlessness, and cruelty are the subjects of poets writing from ancient times to the present; there are also elegies for warriors, celebrating their brave deaths. Carl Sandburg, Walt Whitman, and Stephen Crane share pages with Anakreon and Simonides; there are contributors from Beirut and Bosnia, as well as from the death trains of WWII. Among McCurdy’s somber and realistic black-and-white illustrations are dead soldiers hanging on barbed wire, and a lone soldier standing in a graveyard, holding his head as he says goodbye to those who have died on the fields. The book makes vivid humankind’s innate darkness and makes war painful again. (indexes) (Poetry. 10-14)