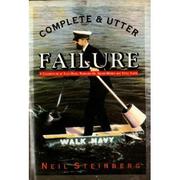 A Celebration of Also-Rans, Runners-Up, Never-Weres, and Total Flops

Readers expecting an antic appreciation of laughingstocks through the ages will be justifiably disappointed by this wry, selective, and self-absorbed compilation. Steinberg, a reporter at the Chicago Sun-Times, offers seriocomic perspectives on would-be winners consigned to history's dustbin by virtue of their second-best or unavailing efforts to reach their objectives. Cases in point range from the unsung mountaineers who stopped short of Everest's peak through Elisha Gray (whose telephone patent application was filed hours after Alexander Graham Bell's); prodigies who outlived their youthful achievements (Isaac Newton, Charles Darwin, Orson Welles, Thomas Pynchon, Michael Jackson, et al.); and commercial products that proved to be drugs on the market (butane candles, Corfam shoes, the Edsel, SelectaVision, the smokeless cigarette). Covered as well are impossible dreams like cold fusion and perpetual-motion machines, as well as the 1993 National Spelling Bee, which produced nearly 9 million losers. While combing the Global Village's archives for evidence of ill-fated institutions and individuals, the 34-year-old author gives himself almost equal time. Indeed, Steinberg's consciously rueful accounts of his own life and career amount to a stealth autobiography. In certain instances (e.g., when he recalls climbing the television tower of the Windy City's John Hancock Building on assignment for his newspaper), the personal recollections afford a resonant point of reference for briefings on the hapless ones who could not make it up some slippery slope or other. On balance, unfortunately, the author's inch-deep reflections on his own experiences do precious little to complement, let alone illuminate, discursive takes on the forgotten strivers whose setbacks have helped define success. Droll rather than hilarious, and more elegiac than celebratory: a dispensable example of vaulting ambition that o'erleaps itself. (First serial to Granta; Quality Paperback Book Club selection)