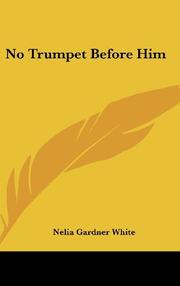 NO TRUMPET BEFORE HIM

A competent, sympathetic novel of a sensitive, admirable man, first a Christian and then a Methodist minister, and his patient, soul-trying struggle to bring simple, every-day Christianity into his life and that of his fashionable parishoners. Phillips refused to preach fire and brimstone, or to turn his church into a social club, and for his humble but firm, stand he was a failure in his small rural community but an understanding, courageous bishop transferred him to an intellectual, sophisticated, social center. His directness and simplicity brought him only enemies;- a hostile board who wanted to rule him, the disdainful bishop's daughter who suffered from a broken marriage, the widow of his predecessor who resented her loss of power, etc. And to help him, his beautiful, but selfish, ambitious, wife balked all of his moves. Finally his influence prevails -- a slum is cleared, tolerance takes the place of prejudice, psychological obstacles to a romance are removed, purpose is given to purposeless lives, and Phillips finds but does not keep a new love, goes on to a future with his wife based on mutual respect and mature affection. A well contrived, well written story with adult, intelligent values. Serialized in the S.E.P., winner of the $8,000 Westminster Annual Award for Fiction, headed for best-selling in the bush leagues.