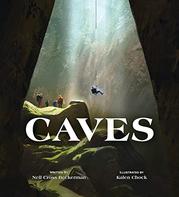 An invitation to share some of the world’s speleological wonders.

Lit by the flashlights of small visitors, huge, rugged, shadowy spaces beckon in Chock’s powerfully atmospheric illustrations as Beckerman’s accompanying mix of free-verse commentary and blocks of explanations in smaller type turn general impressions into specific sites and sights. Among the latter are the dazzling tangle of giant selenite crystals in Mexico’s Cueva de los Cristales, ancient cave paintings at Lascaux in France, an immense underwater cave system in Florida, and (for truly courageous adventurers) the “silently squirming ceiling” of glowworms in New Zealand’s Waitomo Caves. The author also pays particular tribute to the group of women who ventured into the constricted reaches (judged too narrow for men) of South Africa’s Rising Star cave system to uncover fossils of a new prehistoric cousin, Homo naledi. All around the world caves are waiting “for / wondering, / wandering / explorers / like you,” she concludes. “Do you dare?” For those who might, the book closes with lists of safety rules and recommended caving gear. Tiny spelunkers in the art are nearly all bundled up and facing away from viewers, but some at least are plainly children, and an observation that the floors of some lava tubes in Australia are flat enough for wheelchairs makes Beckerman’s invitation even more inclusive. (This book was reviewed digitally.)