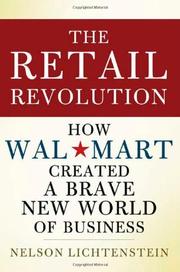 How Wal-Mart Created a Brave New World of Business

Wal-Mart employs two million people and operates 6,000 stores, “doing more business than Target, Home Depot, Sears Holdings, Safeway, and Kroger combined.” Historian and Wal-Mart authority Lichtenstein (History/Univ. of California, Santa Barbara; State of the Union: A Century of American Labor, 2003, etc.) writes that its success “has transformed the nature of U.S. employment, sent U.S. manufacturing abroad, and redefined the very meaning of globalization.” The author brilliantly situates his narrative within the context of world history and the global economy, creating a lucid, evenhanded text that often reads like a novel. Relying on scholarly and journalistic sources, including his own reporting and interviews, Liechtenstein reveals how Wal-Mart’s domination of the retail world stems from its ruthless efficiency of distribution and consolidation of control at its Bentonville, Ark., headquarters. He also demonstrates the company’s shrewd use of technological innovation—particularly satellite communications and the now ubiquitous bar code. The author is especially effective in his discussion of the geological and social landscape from which it grew and derived its crucially important and much-emulated corporate culture—the poor, mostly white, rural Ozark Mountains. In this region, women and minorities were discouraged from pursuing social mobility, businesses were hostile toward laws impeding customary labor arrangements—i.e., cheap hourly wages, untenable work schedules and enormously high turnover rates—and the forces of evangelical Christianity, while not officially embraced by Wal-Mart, worked in harmony with its small-town values of family and faith. Lichtenstein paints a convincing portrait of a multinational conglomerate willing to dehumanize people in its pursuit of profit, even as it tries to convince us that people are its No. 1 concern.

A definitive survey of Wal-Mart and the company’s worldview.