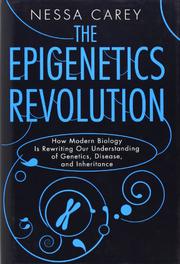 How Modern Biology Is Rewriting Our Understanding of Genetics, Disease, and Inheritance

British virologist Carey tackles epigenetics with a passion to explain a rapidly developing and complex field.

Early on the author reminds us that a surprising finding from human-genome research is that only two percent of the DNA in our cells codes for proteins used in the body. Though it was once fashionable to call the rest “junk” DNA, that’s not the case today. Some of this DNA is transcribed as “non-coding RNA” with various functions, and some codes for proteins that determine which genes are expressed and which genes are silent in a given cell type—a liver or a skin cell, for example—ensuring that when these cells divide, the daughter cells will be the same type. Epigenetics is the study of those DNA controls, the key players for which are proteins that attach methyl groups to selected parts of DNA and proteins that add acetyl groups to histones (proteins associated with DNA on chromosomes). None of these controls is evident when sperm meets egg and undergoes initial cell divisions, which explains why “embryonic stem cells” are prized for their ability to develop into any cell type. As Carey surveys the field, she dwells on early development as a critical period when environmental influences can affect epigenetic controls with long-term effects. Thus women pregnant in the first trimester in the infamous Dutch famine in World War II gave birth to offspring at increased risk for obesity as adults. Similarly, Carey explores epigenetic changes due to childhood abuse as contributing to stress-related illnesses in maturity. Epigenetic effects may also play a role in schizophrenia and chronic diseases, including cancer, and have already inspired new drugs to inhibit epigenetic controls. There is also fascinating research to explain, for example, why feeding honey-bee larvae royal jelly will turn them into queens and not sterile workers. Carey makes clear that debate and controversy attend this rapidly growing field, and she takes pains to explore alternate (non-epigenetic) explanations for various findings.

An exhilarating exploration of an exciting new field, and a good gift for a bright biology student looking for a career choice.