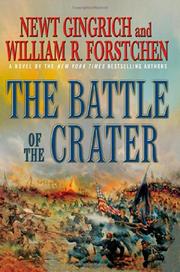 BATTLE OF THE CRATER

Joined by Forstchen, Gingrich deconstructs an 1864 Union effort that could have ended the war. The Battle of the Crater occurred after Grant maneuvered away from a bloody stalemate at Cold Harbor to attack near Petersburg, Va. Grant wanted to seize Richmond, the linchpin of the Confederacy. Jerusalem Plank Road, “the aorta of Bobbie Lee,” linked the two cities. However, Grant’s probe soon descended into trench warfare, with Confederate lines anchored by Pegram’s Battery. The 48th Pennsylvania Infantry, led by Lt. Col. Henry Pleasants, volunteers from coal-mining country, realized the fortification was only a few hundred feet from their own lines. The miners believed they could tunnel under no-man’s land until they were beneath the fortification, and then plant enough explosives to blast a hole in the defenses. The daring plan was put in place, although few of the brass believed it would work or offered material support. Pleasants, Burnside, Meade and other officers are well-known figures, but other historical people appear, including Garland White, once a slave to Senator Toombs of Georgia, but then serving as sergeant major of the 28th Colored Infantry. A fictional illustrator for Harper’s Weekly, James Reilly, nourished as a homeless young man by an attorney named Abraham Lincoln, is the now-President Lincoln’s secret eye on the battlefield. His character ties the narrative together. The fractured relationship between Burnside and his superior, Meade, which may have doomed the unorthodox plan, is dissected. The authors also provide insight into the treatment of African-American troops, superbly trained to lead the drive through the breech but relegated to the reserves by prejudice. Reilly’s fictional perspective is gained by hindsight, and there’s a disconcerting random switching from first to surnames, but overall, the action-filled narrative is easily followed through the planning, the battle and the inquiries that followed.