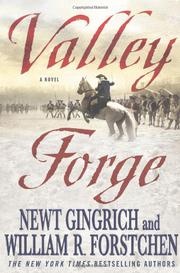 A you-are-there account of George Washington's—and Baron von Steuben's—stalwart efforts to whip the beaten-down Continental Army into the crack fighting force that defeated the British.

Former Speaker of the House Gingrich and Forstchen, co-authors of six previous historical novels, continue their George Washington saga (To Try Men's Souls, 2009, etc.) with the inspirational story of Valley Forge. Having been routed at Brandywine and Germantown and suffered the massacre of a unit at Paoli, Gen. Washington's Continental Army is in shambles, mentally and physically. Underfed, poorly equipped, undermanned and dispirited by the depletion of some 2,000 soldiers, they stand no chance of defeating the more disciplined and professional British infantry. Dissenting brass assailing Washington's "Caesarisms" are calling for his removal. A large number of colonialists, fighting as Loyalists, are aiding the British cause. Enter Baron Friedrich Wilhelm Ludolf Gerhard Augustin von Steuben of Germany. A battle-scarred veteran of the Seven Years' War, he has both the military expertise to upgrade the troops and the psychological astuteness to reach men whose outspokenness, sense of pride and moral outlook are distinctly American. The book, which boasts another European hero in the Marquis de Lafayette, succeeds in putting a human face on the conflict. But except in brief private moments with his loving wife Martha, in which she clearly holds rank over him, Washington is a cardboard figure. The battle scenes are solid, but the reader has to get through a lot of talk and stiff inner reflections to get to them. And while Gingrich and Forstchen effectively link past and present in showing how Washington's men, like today's soldiers, had to cope with a lack of bureaucratic support, the authors may want to remove some of the anachronistic dialogue ("he had tried to wrap his brain around English") in later editions.

An informative if starchy novel about a crucial turning point in American history.