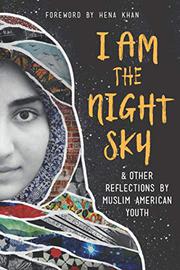 I AM THE NIGHT SKY

...& Other Reflections by Muslim American Youth

by Next Wave Muslim Initiative Writers

An anthology of short stories, poems, and collages by 10 American Muslim teens.

A project of the nonprofit Next Wave Muslim Initiative, this collection presents the work of young people who reflect on their experiences as members of a marginalized and misunderstood faith coming-of-age in the greater Washington, D.C., metropolitan area. Iman Ilias’ “How To Be a 14-Year-Old Paki Muslim American Girl” and Leyla Rasheed’s “Moments I Remember I’m Muslim” unpack the social pressures on Muslim teens to simultaneously fit in and retain their sense of self. “Kabob Squad Takes Down Propaganda Man: (A Concept for the TV Show I Needed as a Kid),” by Samaa Eldadah and Fatima Rafie, and “Hyphen,” a poem by Noor Saleem, both address representation and identity. Other themes explored include relationships to prayer, perceptions of the hijab, and what it’s like to be an observant Muslim guitarist navigating the American teen party scene. Readers seeking a sociological account of the persecution of American Muslims will have to look elsewhere. This volume focuses instead on the creative minds of Muslim American youths themselves, opening a window into the complexity of their lived realities as teens in today’s America. The varied text layouts, font styles, and exceptional art enhance the reading experience. The book features a foreword by Pakistani American children’s author Hena Khan. The contributors are diverse in ethnicity, race, and sect.