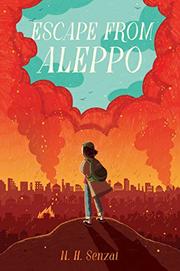 Senzai (Ticket to India, 2015, etc.) tells the story of 14-year-old Nadia’s narrow escape from the ancient city of Aleppo in war-torn Syria as she desperately seeks her family, who accidentally left her behind.

Two years into Syria’s civil war, the many armed rebel groups and the government forces are descending on Aleppo. Traumatized since her bomb injury, Nadia is pulled from under her bed as her family prepares to leave their home for a safer place. Although a relative has been assigned to monitor her, another bomb falls as they are exiting, and in the confusion, Nadia is left behind. Now she must recover from the shock and rely on her instincts, a seemingly kind old man she meets, and, ultimately, her own intelligence to make it out of Aleppo alive and find her family at the Turkish border. All of this she manages to do in fairly short order, with a series of rather abrupt changes in her psychological state. Through Nadia’s conversations with other characters and through extensive exposition, readers learn about the impressively vast and complex history of Aleppo and of Syria. The Arab Spring is also treated in detail. Nadia’s flashbacks give insight to life under dictatorship and the drastic changes introduced by war. Arabic words are italicized once, then printed in Roman type.

Despite narrative hitches, a valuable introduction to the issues plaguing modern Syria and the costs of war in historically rich locales. (Historical fiction. 8-12)