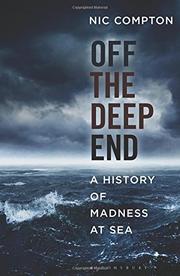 OFF THE DEEP END

A History of Madness at Sea

How and why the sea has historically plagued those who work and play in its waves.

British journalist and avid sailor Compton’s (The Shipping Forecast: A Miscellany, 2016) affinity for the sea is evident throughout his engrossing exploration of the hypnotic and mentally altering effects of the world’s oceans. In 1941, his father, a Royal Navy lieutenant commander, was thrown from a torpedoed boat, and his fight for survival would psychologically haunt him for decades. It is this very terror and the “distorting lens of the sea” that fuels Compton’s passionate maritime scrutiny. He escorts readers along a globe-trotting tour of some of history’s most menacing bodies of water and the men and women who found themselves at the mercy of a host of bizarre illusions. The author scours the nautical histories of the Strait of Magellan at the dawn of the British Empire; a ship’s log notes disorientation, scurvy, suicide, and madness. Compton also looks at the phenomena of calenture first observed by Spanish sailors in the 17th century, and he explores the suppressed bipolar symptoms of Christopher Columbus and William Bligh in chapters that plumb the depths of psychosis at sea. Other true tales describe shipwreck survivors adrift on the open sea who desperately succumb to cannibalism to survive, as well as the physical effects of seawater ingestion, which virtually guarantees delirium, dehydration, and certain death. Elsewhere, solitary sailors fall prey not to storms or disease but “isolation and loneliness.” These historical incidents also carried with them the enduring social stigma of mental illness, and Compton intermittently addresses this issue while speculating on the true root causes of these “sea-induced frenzies.” Though relaxation and thalassotherapy are just a few of the touted benefits of oceanic waters, the author captures their unsavory capacity to haunt and perplex: “the sea has a lobsterpot full of tricks and illusions to confuse and beguile even the most rational 21st-century sailor.”

A fascinating and engrossing nose dive into the underreported depths of nautical insanity.