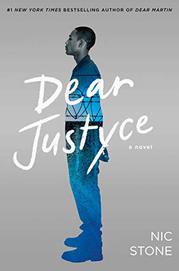 The deck is stacked against incarcerated 16-year-old Quan as he faces up to 20 years in prison in this sequel to the New York Times bestseller Dear Martin (2017).

With his father in prison, Quan works hard to excel in school, avoid his mother’s abusive boyfriend, and keep his siblings from going hungry. Bright but burdened, Quan eventually begins committing petty crimes and lands in a youth detention center. Through Quan, Stone brilliantly portrays the voices of incarcerated Black youth, their trauma, hopelessness, and awareness of how fraught and fragile their futures are due to racial disparities in the criminal justice system. Quan sees a 12-year-old Black boy locked up for a year for merely associating with gang members while a 17-year-old White boy who stabbed his father eight times serves only 60 days. But Quan isn’t left to fight for his freedom alone; his best friend, Justyce, makes sure of that. Quan’s story is eloquently told in part through letters he writes to Justyce, who is attending college at Yale. Fans of the previous volume and new readers alike won’t want to put down this unforgettable volume until they learn Quan’s fate.

A powerful, raw must-read told through the lens of a Black boy ensnared by our broken criminal justice system.