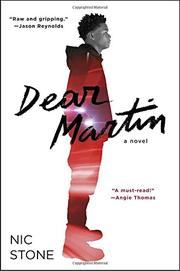 In this roller-coaster ride of a debut, the author summons the popular legacy of Martin Luther King Jr. to respond to the recent tragic violence befalling unarmed black men and boys.

Seventeen-year-old black high school senior Justyce McAllister, a full-scholarship student at the virtually all-white Braselton Prep, is the focus. After a bloody run-in with the police when they take his good deed for malice, Justyce seeks meaning in a series of letters with his “homie” Dr. King. He writes, “I thought if I made sure to be an upstanding member of society, I’d be exempt from the stuff THOSE black guys deal with, you know?” While he’s ranked fourth in his graduating class and well-positioned for the Ivy League, Justyce is coming to terms with the fact that there’s not as much that separates him from “THOSE black guys” as he’d like to believe. Despite this, Stone seems to position Justyce and his best friend as the decidedly well-mannered black children who are deserving of readers’ sympathies. They are not those gangsters that can be found in Justyce’s neighborhood. There’s nuance to be found for sure, but not enough to upset the dominant narrative. What if they weren’t the successful kids? While the novel intentionally leaves more questions than it attempts to answer, there are layers that still remain between the lines.

Though constrained, the work nevertheless stands apart in a literature that too often finds it hard to look hard truths in the face. Take interest and ask questions.