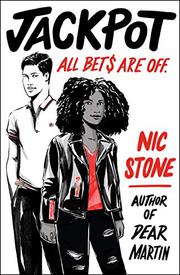 Seventeen-year-old Rico’s family is living paycheck to paycheck and way beyond their means, even with Rico’s practically full-time job and her mother’s long hours.

When a customer purchases the winning ticket at the Gas ’n’ Go where she works but doesn’t claim it, Rico begins searching for the elderly woman she believes to be the winner. She enlists the help of Zan, the superrich heir of Macklin Enterprises in their hometown of Norcross, Georgia. Rico tentatively begins to hope in the future as her feelings for the privileged and complex Zan and her camaraderie with new friends finally start balancing out her family’s struggles. Filled with rich character development, whip-smart dialogue, and a layered exploration of financial precariousness, Stone (Odd One Out, 2018, etc.) touches on rising health care costs, the effect of illness in the family, interracial dating, and biracial identity. Intermittent passages from the perspectives of inanimate objects—including the winning ticket—around the characters add humor, and the short chapters inject the narrative with suspense. Rico is white, Latinx, and black. Zan is Latinx and white, and they live in a predominantly white neighborhood. Readers will have to suspend disbelief at the book’s conclusion, but this romantic coming-of-age novel will have them hoping for their own lucky ending.

Stone delivers a thoughtful and polished novel about class, privilege, and relative poverty.