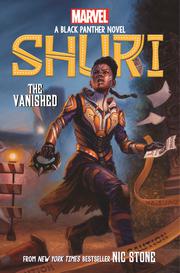 From the Black Panther series, volume 2

Princess Shuri of Wakanda is back in this sequel to Shuri (2020).

A few months after Shuri and her best friend, K’Marah, saved Wakanda’s beloved heart-shaped herb, the confidence placed in Shuri by others (especially her mother, Queen Ramonda) doesn’t appear to have grown. Third-person narration again alternates with Shuri’s first-person mission logs to chronicle the princess’s life. Studious Shuri seems primarily focused on her academics. She lies about K’Marah to protect herself, neglecting to show her friend much empathy when she notices K’Marah behaving strangely. She resists acting when she first learns about worldwide disappearances of gifted young girls in STEM fields. Dismissing K’Marah’s concerns, despite some nagging guilt, Shuri follows Wakanda’s noninterventionist approach and convinces herself that two young girls like themselves couldn’t possibly have an impact on a problem with a global scale—until K’Marah eventually pressures her into action. The writing in this sequel is stronger than in the first installment, and this time around Shuri reads as less American. The theme of missing girls from countries around the world—including Pakistan, France, Kenya, the U.S., and the Philippines—is important, although the identity of the perpetrator complicates matters.

Fans of the first volume will enjoy returning to Wakanda.