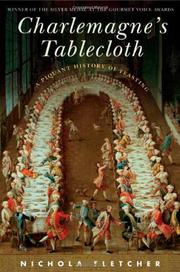 A Piquant History of Feasting

A smorgasbord of informative and entertaining essays on feasts through the ages, from the sweet and spicy indulgences of ancient Persia to the Scottish celebration of Hogmanay at the turn of the second millennium.

Scottish food writer Fletcher describes not just the dishes offered in feasts, but the rituals of preparing and presenting them and the ambience surrounding them. She also explores the myriad reasons for feasting and the occasionally dubious motives of the hosts. Many feasts—after the coronation of a monarch or the celebration of a wedding, for example—are held to mark rites of passage. Others give thanks for a good harvest or mark the end of a fast. Still others are staged in an effort to grasp or hold onto power. (The author’s account of an aggressive feast held by a 19th-century chief of British Columbia’s Kwakiutl people includes a stomach-churning description of competitive blubber swallowing.) The measures taken to impress guests can be astonishing: Fletcher cites a 16th-century Hungarian feast in which a quail was placed inside a capon inside a lamb inside a calf inside an ox. By way of contrast, she details a spiritual feast called cha-kaiseki, a frugal vegetarian meal served as part of a Japanese tea ceremony. One of the most interesting feasts described here is one prepared by the author herself for an international congress of deer experts; every dish contained some deer product, the finishing touches being an ice cream made of reindeer milk and a fiery liqueur containing extract of velvet antler. Fletcher’s scope is broad. Her selections include an 1870 Christmas dinner during the siege of Paris at which the Restaurant Voisin served up creatures from the zoo, the Aztecs’ ritual cannibal feasts and the meager but memorable meal of bread and potatoes enjoyed by Primo Levi and his fellow prisoners at Auschwitz after the Germans abandoned it in 1945.

This pleasurable treat can be consumed as presented or sampled in any order. (Three 8-page b&w photo inserts, not seen)