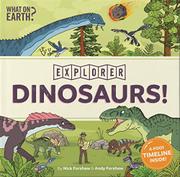 From the Explorer series

An overview of the dino clan, featuring a populous fold-out timeline of the Mesozoic Era.

The book opens with a perfunctory setup in which Eric Eagle, intrepid librarian, is sent back in time to “file a report on the entire history of the dinosaurs.” Following this, a set of sober-sided disquisitions survey the history of dino-discovery, then dinosaur hip bones, lives, diversity of forms, adaptations, extinction, and modern successors. Forshaw’s painted group and individual portraits are all likewise staid (some predators do at least have bloodless bits of prey hanging from their mouths), but there are a lot of dinosaurs on view, systematically identified and dated. There is also a portrait gallery of paleontologists, all (like “Agent Eagle”) white but two of whom are living women. The accordion-folded timeline, which is one-sided and perforated for easy removal, begins with the Triassic Period, ends in a truncated view of the Cenozoic (with a chicken), and is thick with both colorfully patterned creatures and short, descriptive annotations for each. Three sets of easy quizzes allow young fans to see how much of the “reports” they have retained. Bugs!, also by the same authorial team but with illustrations by William Exley, opens with a virtually identical setup and proceeds to cover the “bug” world in similar fashion.

Serviceable, if a bit dry.