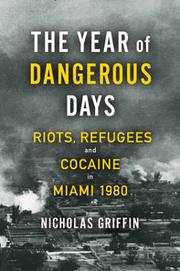 THE YEAR OF DANGEROUS DAYS

Riots, Refugees, and Cocaine in Miami 1980

Race, cocaine, politics, and corruption all figure in this portrayal of a violent showdown in 1980 Miami.

Miami-based journalist Griffin employs his trade with gusto in this deeply investigated account of real American carnage at the height of the drug war. The narrative begins with the death of Arthur McDuffie, a black former Marine who was killed by police after a high-speed chase. The events that follow would have massive ramifications. Rather than simply depicting the big picture, the author zeroes in on three critical figures to parse the tumult from different points of view: Edna Buchanan was the Miami Herald crime reporter who not only fielded the murder investigation, but unearthed the vein of corruption and police brutality inside the department. Inside the police force, we meet Capt. Marshall Frank, the lead investigator, who characterized the McDuffie case as a “jigsaw puzzle.” Charged with uniting the city in the face of multiple crises was Mayor Maurice Ferré, who engaged the media, the tourist industry, and the city’s powerful businessmen to help a simmering city that was on the verge of falling apart. Two other factors added dynamite to the bonfire. One was the infamous Mariel boatlift, during which Fidel Castro attempted to rid his country of criminals, patients in insane asylums, troublesome activists, and other “antisocial elements” by dumping 125,000 Cuban refugees into the state of Florida. The other was the relatively new phenomenon of cocaine smuggling, which added significantly to both the proliferation of corruption and the city’s crime rate, especially violent crimes. This is a series of stories that have been depicted in other books and publications, but Griffin’s engrossing use of primary sources and cogent analyses of how all the pieces fit together results in a propulsive story about the dangerous ways people learn to live together.

An engrossing, peek-between-your-fingers history of an American city on the edge.