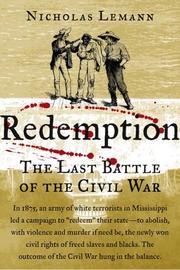 The Last Battle of the Civil War

The Civil War ended not with Lee's surrender in 1865, but ten years later, with the triumph of white supremacy throughout the unrepentant South.

After an opening chapter on anti-black violence in Colfax, La., in 1871, Lemann (The Big Test, 1999) turns to Adelbert Ames (1835–1933), a West Point graduate who fought in 16 Civil War battles and who rose to the rank of brigadier general, won a Medal of Honor, then commanded federal troops overseeing Reconstruction in the South. Under his supervision, Mississippi enacted a constitution granting former slaves the vote, and elected a largely Republican legislature that, in 1870, sent Ames to the U.S. Senate. In Washington, he met and married Blanche Butler, daughter of a union general widely viewed as a possible successor to U.S. Grant as president. But with Ames’s 1873 election as governor of Mississippi, the tide began to turn. Eager to recapture power, white Mississippians began a campaign of ruthless intimidation. Republican rallies were broken up by Democratic gunmen who blamed the violence on blacks. In Vicksburg, armed whites ousted the Republican sheriff and murdered anyone who dared resist their rule. Ames asked for federal troops to restore order. But the president, more concerned with courting Northern businessmen, vacillated. Finally, the opposing parties agreed to end the violence—too late to save the Republicans. The 1876 election saw Mississippi blacks staying away from the polls in droves; those who attempted to vote were driven away at gunpoint. In the end, Ames resigned his governorship to avoid impeachment, and Reconstruction came to an end. Southern blacks would not receive full citizenship for nearly another century.

A sobering account of the true end of Reconstruction, long suppressed in favor of the self-serving fairy tale peddled by the victors.