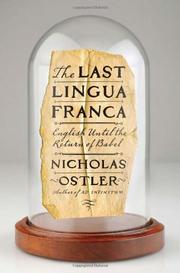 English Until the Return of Babel

A bracing history of lingua francas and their dynamic variation, with a focus on the perfect wave that International English is riding—toward a wipeout, predicts Foundation for Endangered Languages founder Ostler (Ad Infinitum: A Biography of Latin, 2007, etc.).

Will English be “the last lingua franca,” exempt from the processes of “ruin, relegation, and resignation” that wasted such precursors as Akkadian, Aramaic, Greek, Persian, Sanskrit and Latin? David Crystal (English as a Global Language) and David Graddol (The Future of English) thought so, and Ostler agrees—but with a subversive twist. English’s days as the international bridge language for business, diplomacy, science, technology, education and entertainment are numbered, but its hegemonic place won’t be taken by another language, he writes. The same trend of technological innovation that spurred the triumphal expansion of English will unseat it. Continuing advances in machine translation and real-time speech-to-speech translation between any two languages will end the world’s need for one privileged interlingual language. In the ensuing egalitarian era of Babel, English will shrink back to its mother-tongue hinterland, freeing billions from ESL drudgery. Techno-utopian speculations aside, most of the matter in this book was prefigured in Ostler’s Empires of the Word (2005), which ranged across all imperial languages, both lingua francas and not (like Egyptian and Chinese). Sections on the meteoric rise and coming flame-out of International English bracket a middle section drilling down into past lingua francas, with two meaty and occasionally pedantic chapters dedicated to Persian. The author employs the same exuberantly comparative approach as Empires and recycles, sometimes verbatim, many of its arguments, parallels, anecdotes and paleographic examples. Ostler reproduces the latter in their original scripts, together with transliterations and translations. His aim is not pedantic but to pique general readers’ code-cracking interest.

Ostler does not assume specialist knowledge, but he does assume that his readers share his gargantuan and voluptuary appetite for words, languages and history.