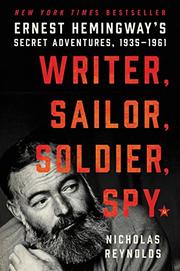 While working on an exhibition at the CIA Museum, retired Marine Corps and CIA officer Reynolds (U.S. Marines in Iraq, 2003: Basrah, Baghdad and Beyond, 2016) discovered “tantalizing traces” of Hemingway’s involvement in the Office of Strategic Services and Russia’s NKVD, the precursor of the KGB. Beginning with that tenuous evidence, the author has assembled fragments from FBI and NKVD files, sometimes more suggestive than definitive, to create this mostly engrossing story of Hemingway’s disillusionment with American politics, his sympathy with communism, and his attraction to adventure and subversion. Two events changed Hemingway’s political perspective: a devastating hurricane in the Florida Keys in 1935, when the government failed to evacuate stranded World War I veterans, “who died by the hundreds”; and the refusal of the U.S. to support the Republicans in the Spanish Civil War. Both made him “passionately pro-Republican and antifascist” and therefore a likely recruit for the NKVD. He seems not to have engaged in much actual spying either for the Soviets or, later, the Americans, to whom he also ferried information. During a trip to China with his wife, Martha Gellhorn, he reported to Washington about “the friction…between the Nationalists and the communists,” information that did not come from secret meetings or stolen papers. In 1942, living in Cuba, he headed what he called the “Crook Factory,” a motley collection of friends who reported to the American ambassador about any odd behavior among German or Spanish businessmen on the island. Like most of his spying activities, this one was short-lived. In his later years, Hemingway became obsessed with the idea that he was under FBI surveillance, and the author speculates that this delusion “deepened his depression and made his final illness worse.”

Although Reynolds is forced to guess about much of Hemingway’s secret life as a spy, his conclusions seem consistent with the well-known portrait of the novelist striving to prove his manliness and power.